Tony Crescenzi of Pimco is at it again. For the second time since being given the privilege of replacing the now-retired Paul McCulley as the lead author of Pimco's Central Bank Focus (CBF) column, Crescenzi has written a piece that has the effect of undermining the current position of Pimco's two chief investment officers, Bill Gross and Mohamed El-Erian, both of whom have recently been calling upon the US federal government to do more to create jobs, update public infrastructure and invest in education.

Entitled "Saying no to Keynes and Fiscal Folly", Crescenzi's August edition of CBF is half-filled with the usual nonsense equating Keynesian-inspired policy remedies with costly and wasteful government spending.

The problem with Crescenzi's contention that the application of Keynesian economics and its focus on stimulating aggregate demand through government expenditures result in a net cost to society is that it completely disregards the productivity-enhancing nature of public investment. As economists David Aschauer (1989) and Alicia Munnell (1990) have shown, public sector investment results in productive assets that tend to enhance private sector productivity in the long-run.

In other words, Crescenzi really needs to be more careful. As I mentioned in a previous post, Crescenzi's anti-Keynesian message is exactly the type of commentary that opponents of government intervention would use to attack the very proposals now being recommended by Gross and El-Erian to help prop up the US economy and mitigate against the possibility of another economic downturn.

So, all that being said, what really is the true legacy of Keynesian economics? I like to think that Michael Stewart captured it best when he designed the cover image for his classic text on Keynes, Keynes and After (London: Pelican, 1967): nothing less than three consecutive decades of persistently low unemployment. 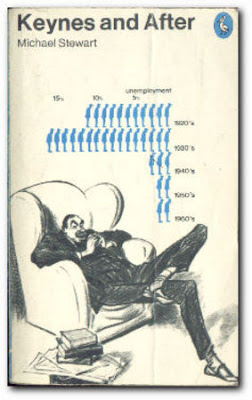