The unemployment figures released by Statistics Canada this week are a huge disappointment. With employment in Canada declining by 54,000, all in full-time, and the national unemployment rate climbing by 0.2 percent to 7.3%, it is now clear that Canada was not able to avoid the current slowdown affecting the global economy.

But the most alarming part of October's Labour Force Survey are the figures relating to changes in employment in Ontario, one of Canada's most important industrial regions.

To put it bluntly, the figures are simply devastating. The loss of over 75,000 full-time jobs in Ontario, approximately half the amount of full-time jobs created during the last year in the province, represents a massive blow to Canada's economy. As a matter of comparison, even during the worst of the 2008-2009 downturn, full-time employment in Ontario did not once decline by this much within a single month. And the fact that part-time employment increased by 36,000 jobs in the province does nothing to attenuate the significance of October's decline in full-time positions.

There are two reasons why this turn of events should be of concern to Canadian policymakers. The first is that a rise in part-time jobs without at least some growth in full-time employment does little to improve the economy during a recovery. This is the case because part-time work is often temporary and usually not as high-paying as full-time work.

Another reason to be concerned about the sharp drop in full-time employment in Ontario is because of what it means for the province's manufacturing sector. Given that most of the losses in full-time work originated in the manufacturing sector, it is possible that the job losses are indicative of an acceleration in the decline of Canada's manufacturing sector. While the decline in manufacturing is nothing new (note: Canadian manufacturing has been losing jobs for six years straight, leaving its total employment for the last decade down 22 percent), there are reasons to believe that this trend has accelerated in recent years due to the strength of the Canadian dollar, which makes other nations' exports more competitive, and the drop in demand for Canadian manufactured goods such as automobiles, machinery and equipment. (Cross, 2011)

From a public policy standpoint, the decline in manufacturing has an important downside given that a nation's economy and productivity depends in large part on its manufacturing capacity. However, many policymakers erroneously believe that economies can thrive solely on their services sector. According to economist Ha-Joon Chang, this view is wrong because it disregards the link that exists between a nation's manufacturing capacity and productivity growth. Chang sums up the problem succinctly in the following excerpt of his most recent book:

Given that productivity growth plays a critical part in improving our standard of living and quality of life, it would be wise for Canadian policymakers to view seriously any possible acceleration in manufacturing's decline.

One way to address this possibility and help counter any acceleration in the decline of Canada's manufacturing sector would be to put forth a national industrial policy. While some readers may recall that the federal government implemented a policy called Advantage Canada in 2007 to help promote Canadian industry, it should be mentioned that this strategy was abandoned when the federal government put forth the Canada Economic Action Plan, the stimulus package aimed at boosting the economy during the last recession.

To be sure, a national industrial policy should not aim at replacing the current Economic Action Plan. On the contrary, it would be appropriate for the policy to build on the combined success of the federal and provincial governments' stimulus measures, all of which made Canada's response to the recession one of the most effective countercyclical economic policies implemented by a major nation during the last recession. As shown in the chart below, as a result of these stimulus measures, Canada's ratio of fixed public investment as a percentage of gross domestic product now stands at the highest level in over three decades. The fact that Canadian unemployment did not rise too sharply during the last downturn is in good part a consequence of the significant increase in fixed public investment. 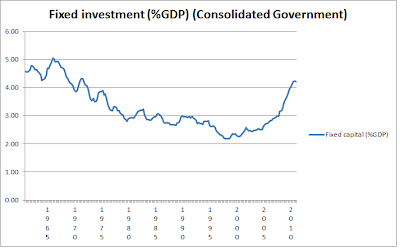 Therefore, instead of winding up the current Economic Action Plan, as the federal government appears to be doing as part of its strategy to reduce the deficit, the government should rather be shifting the focus from investing in public infrastructure to implementing measures that will enhance the competitiveness of Canadian industry and, more specifically, its manufacturing sector. Such a measure would be consistent with the approach taken by Canadian governments in recent years and an appropriate transitional policy at this stage in the recovery.