Deficit, Deficit, Who's got the Deficit? (Secular stagnation edition)

Over 50 years ago, James Tobin wrote an article for the New Republic entitled "Deficit, Deficit, Who's got the Deficit" (1963) that explains why the US federal government almost always needs to run a budget deficit.

The article is a gem. It has everything a good macroeconomics article should have: lots of debunking, all the relevant data, and a good dose of policy recommendations.

Unfortunately, the article is nowhere to be found on the internet. This post seeks to fix that by providing some key excerpts. Another purpose of this post is to use Tobin's analytical framework in that article and apply it to today's economic environment in the US.

Tobin on US Sectoral Financial Balances, circa 1963

The article starts off by describing the fundamental (iron?) law of financial balances:


For every buyer there must be a seller, and for every lender a borrower. One man's expenditure is another's receipt. My debts are your assets, my deficits your surplus.

If each of us was consistently "neither borrower nor lender," as Polonius advised, no one would ever need to violate the revered wisdom of Mr. Micawber. But if the prudent among us insist on running and lending surpluses, some of the rest of us are willy-nilly going to borrow to finance budget deficits. 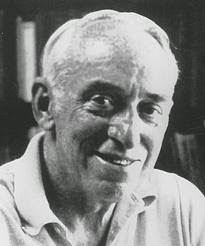 In the United States today one budget that is usually left holding a deficit is that of the federal government. When no one else borrows the surpluses of the thrifty, the Treasury ends up doing so. Since the role of debtor and borrower is thought to be particularly unbecoming to the federal government , the nation feels frustated and guilty.

Unhappily, crucial decisions of economic policy too often reflect blind reactions to these feelings. The truisms that borrowing is the counterpart of lending and deficits the counterpart of surpluses are overlooked in popular and Congressional discussions of government budgets and taxes. Both guilt feelings and policy are based serious misunderstanding of the origin of federal budget and surpluses. (1963:10)

Tobin then goes on to explain that both the household and financial sectors were running large financial surpluses (worth $20 billion combined in 1963):


American households and financial institutions consistently run financial surpluses. They have money to lend, beyond their own needs to borrow. As a group American households and non-profit institutions have in recent years shown a net financial surplus averaging about $15 billion a year -- that is, households are ready to lend, or to put into equity investments...more than they are ready to borrow. [...] In addition, financial institutions regularly generate a lendable surplus, now of the order of $5 billion a year. For the most part these institutions -- banks, saving and loans associations, insurance companies, pension funds, and like -- are simply intermediaries which borrow and relend the public's money. Their surpluses result from the fact that they earn more their lending operations than they distribute or credit to their depositors, shareowners, and policyholders. [...]

The article goes on to list the sectors of the economy that must borrow the $20 billion in surplus funds available from households and financial institutions:


State and local governments as a group have been averaging $3-4 billion a year of net borrowing...Unincorporated businesses, including farms, absorb another 3-4 billion a year. To the rest of the world we can lend perhaps $2 billion a year. We cannot lend abroad -- net -- more than the surplus of our exports over our imports of goods and services, and some of that surplus we give away in foreign aid. [...]

Tobin then follows into a discussion about the policy implications of these lending and borrowing dynamics:


The moral is inescapable, if startling. If you would like the federal deficit to be smaller, the deficits of business must be bigger. Would you like the federal government to run a surplus and reduce its debt? Then the business deficits must be big enough to absorb that surplus as well as the funds available from households and financial institutions.

That does not mean business must run at a loss -- quite the contrary. Sometimes, it is true, unprofitable business are forced to borrow or to spend financial reserves just to stay afloat; this was a major reason for business deficits in the depths of the Great Depression. But normally it is business with good profits and good prospects that borrow and sell new shares of stock, in order to finance expansion and modernization...The incurring of financial deficits by business firms -- or by households and governments for that matter -- does not usually mean that such institutions are living beyond their means and consuming their capital. Financial deficits are typically the means of accumulating nonfinancial assets -- real property in the form of inventories, buildings and equipment.

When does business run big deficits? When do corporations draw heavily on the capital markets? The record is clear: when business is very good, when sales are pressing hard on capacity, when businessmen see further expansion ahead. Though corporations' internal funds -- depreciation allowances and plowed-back profits -- are large during boom times, their investment programs are even larger. [...]

Recession, idle capacity, unemployment, economic slack -- these are the enemies of the balanced government budget. When the economy is faltering, households have more surpluses available to lend, and business firms are less inclined to borrow them. (1963:11)

The Corporate Sector: From Deficits to Large Surpluses

Of course, at the time Tobin wrote this article, US financial balances weren't exactly the same as they are today. Households as a group were running financial surpluses, the US was mostly a net lendor to the rest of the world, and the corporate sector was a net borrower of funds. Essentially, three things have changed since the mid-1980s with respect to financial balances (see charts below, double-click to enlarge). 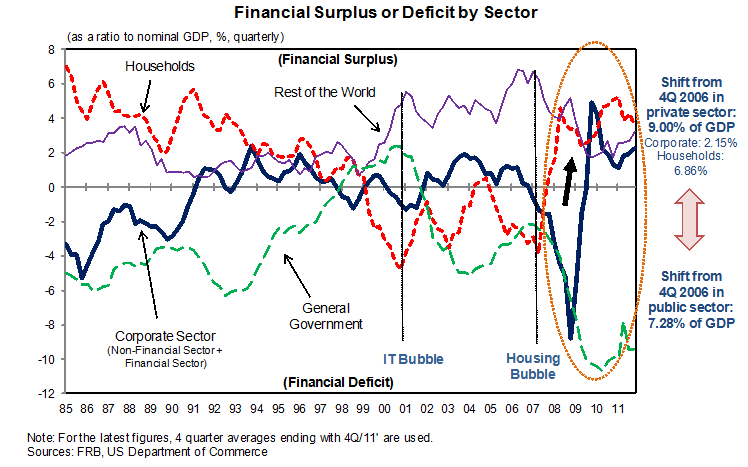 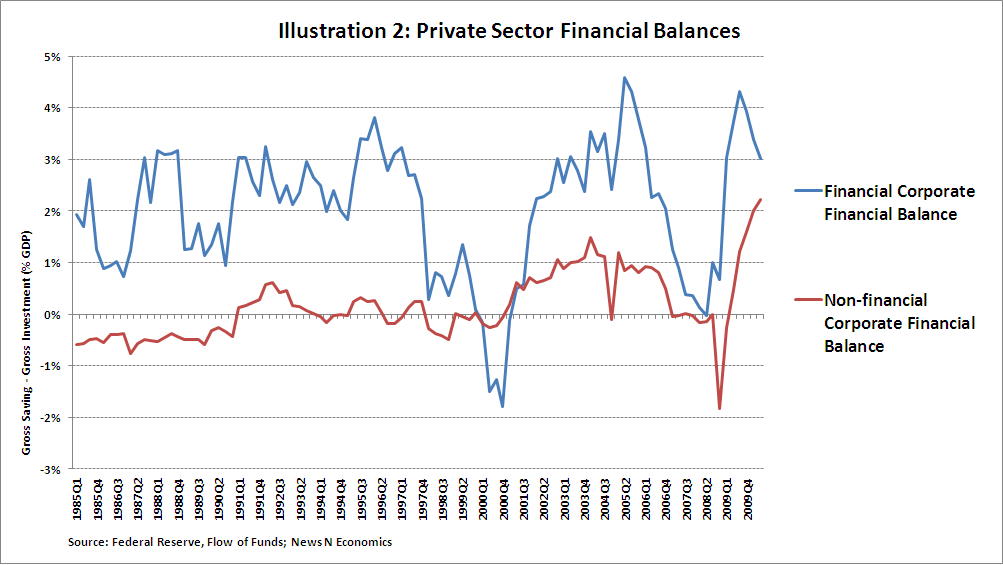 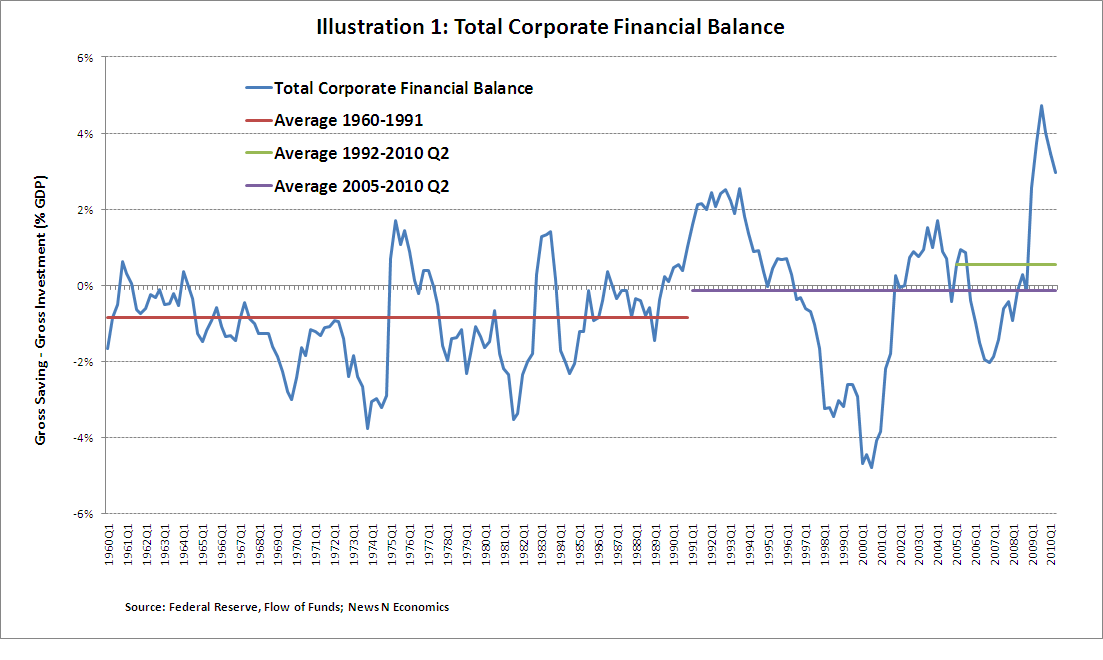 First, starting in the mid-1980s, the US has become a net borrower to the rest of the world. Second, since the early 1990s and until the financial crisis, households were net borrowers to other sectors; since 2007, the household sector has returned to its traditional role of being a net lender. Finally, since the 1990s, the corporate sector has been at different times either a net lender or net borrower. However, since 2009, the corporate sector has been running a very large net financial surplus.*

What is the main policy implication to take-away from this state of affairs?

I would venture that the main take-away is that it's unlikely the US federal government will balance its budget any time soon unless households and/or firms start spending again.

In a recent article for an IMF publication entitled "Secular Stagnation: Affluent Economies Stuck in Neutral", economist Robert Solow (MIT) discussed the business sector's net lending position as a possible sign that there may be a "shortage of investment opportunities yielding a rate of return acceptable to investors" or, stated differently, that the "real rate of interest compatible with full utilization is negative, and not consistently achievable", a situation associated with the notion of "secular stagnation":


In the United States, at least, business investment has recovered only partially from the recession, although corporate profits have been very strong. The result, as pointed out in an unpublished paper by Brookings Institution Senior Fellows Martin Baily and Barry Bosworth, is that business saving has exceeded business investment since 2009. The corporate sector, normally a net borrower, became a net lender to the rest of the economy. This does smell rather like a reaction to an expected fall in the rate of return on investment, as the stagnation hypothesis suggests. (see chart below)

So what can be done? Paul Samuelson and Anthony Scott asked a similar question in the 1971 Canadian edition of their Economics textbook:


What if our continental economy is in for what Harvard's Alvin Hansen called "secular stagnation"? - which means a long period in which slowing population increase, [...], high corporate saving, the vast piling up of capital goods, and a bias toward capital-saving inventions will imply depressed investment schedules relative to saving schedules? Will not active fiscal policy designed to wipe out such deflationary gaps then result in running a deficit most of the time, leading to a secular growth in the public debt? The modern answer is "Under these conditions, yes; and over the decades the budget should not necessarily be balanced." (1971:436-7)

In my next post, I'll write more about secular stagnation and policy responses to address its possible eventuality.

* This post by Brian Romanchuk contains many useful charts and information on financial balances, as well as discusses secular stagnation from a stock-flow consistent perspective.