The Old Keynesian prescription to get out of a deep recession

In my previous post, I highlighted an article that shows the most promising unconventional monetary policies for boosting ailing economies right now are overt monetary financing and the policy measures advocated by neo-chartalists.

It's worth mentioning that, from a practical standpoint, this is essentially what the traditional, Keynesian IS-LM model would prescribe in a context of high public debt combined with nominal interest rates at the zero lower bound.

A good example of the application of IS-LM toward this end is Robert Gordon's analysis of the difficulties facing Japanese policymakers in the 1990s:

If monetary policy is impotent because it cannot reduce the interest rate any further, a fiscal stimulus is required to end the slump and bring back the output ratio back to its desired level [...]

The low level of the Japanese interest rate created a policy dilemma in Japan. Monetary policy could not push interest rates appreciably lower, yet fiscal policymakers felt constrained in achieving a large fiscal stimulus by the high existing level of the fiscal deficit in Japan and by the fact that the public debt in Japan had reached 100 percent of real GDP.

However, the IS-LM model suggests a way out of the Japanese policy dilemma... [:] a combined monetary and fiscal policy stimulus that shifts the LM and IS curves rightward by the same amount can boost real GDP without any need for a decline in interest rates [...]

Also, with such a combined policy there is no need for a further increase in the national debt held by the public, since to achieve its monetary expansion, the central bank can buy the government bonds issued as a result of the increased fiscal deficit [...] 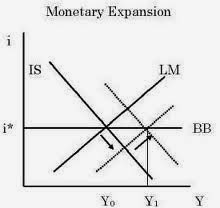 Why did the Bank of Japan resist what seemed to be the obvious solution, which was that the Bank buy up the government bonds issued as a result of the fiscal stimulus? This solution, sometimes called "monetizing the debt", would be the real-world equivalent of shifting the LM curve rightward along with the IS curve, in contrast to the increased interest rates that would result if the IS curve were pushed rightward without a corresponding rightward LM movement. Bank of Japan policymakers retreated into the traditional fear of central bankers that monetizing the debt would undermine the Bank's independence and credibility, two goals that are embedded in the structure of beliefs of central bankers. In fact, as a result of rapid inflation after World War II, the Bank is legally banned from buying bonds directly from government, although it is still able to purchase government bonds indirectly through financial markets.

The traditional reason for the historic reluctance of central bankers to monetize the debt and conduct a simultaneous monetary and fiscal expansion has been fear of inflation. Yet Japan's problem in the late 1990s was deflation, not inflation [...]

While the prescription of the IS-LM model in favor of a combined monetary-fiscal expansion seemed clear, implementing this policy recommendation was blocked by the reluctance of the Bank of Japan's to give up its historic commitment to price stability. (137-138) (emphasis added)

One final word. This type of policy solution goes back a long way. A variant of this mechanism -- minus the IS-LM language -- is even found in (Keynesian) Lorie Tarshis's textbook published in 1947.