Message to Jack Layton and the NDP: monetary policy is not out of reach of Parliament

If the leader of the NDP wants to improve the way monetary policy is conducted in Canada without breaching the doctrine of central bank independence, I would suggest that he and his party use their influence in the upcoming Parliament to require that the government and the Bank of Canada modify their agreed-upon inflation-control target. The timing seems right given that the operational target that the Bank uses to control the level of inflation is due to be renewed at the end of the year.

There is considerable evidence that the current target of 2 percent is too low to ensure an acceptable level of employment and adequate exchange rate (for instance, to support the economy's export market). Speaking in relation to the US, Paul Krugman has recently explained that a target of 4 percent would go a long way to help the economy get closer to full employment. Mr. Krugman's arguments could easily be applied to Canada, as well. The question of whether low inflation targets are desirable was also recently raised by senior IMF economist, Olivier Blanchard, within the context of an IMF-sponsored conference aimed at identifying ways of improving macroeconomic policymaking.

From a political standpoint, I can assure Mr. Layton that many parliamentarians would appreciate having a debate on the merits of low-inflation at all costs. Finally, while he's at it, Mr. Layton should also ask officials at the Bank what they intend to do about the recent increase in unemployment in the face of what appears to be, at most, mild inflation. 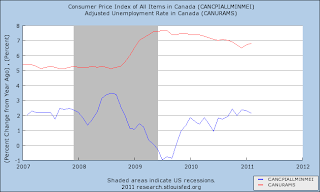 Statistics Canada has just released an interesting study dealing with indebtedness according to family characteristics. While I disagree with the study's premise that indebtedness levels were caused by low interest rates and factors such as "the rise of consumerism" (see here), I thought the sections dealing with the debt profiles of lone-parent families and couple families with children were particularly insightful. According to the study, although the average debt to income ratio in Canada currently stands at 148 percent, the ratios for couple families with children and lone-parent families are as high as 170 percent and 227 percent, respectively. Such statistics are rarely mentioned in most discussions on the issue of indebtedness.

Although the study focuses only on Canadian debt metrics, I can't imagine the situation in other countries with similar demographics (i.e. UK, US or Australia) being any different.
Posted by circuit at 21:29 4 comments:

Email ThisBlogThis!Share to TwitterShare to FacebookShare to Pinterest
Labels: Indebtedness

In a previous post, I criticized the research staff of the St. Louis Fed for failing to explain in an article on the expansion in the US monetary base that the Fed now has the ability to simultaneously defend against inflation and maintain large amounts of excess reserves (contrary to what most macro textbooks claim).

Well, it turns out that someone at the St. Louis Fed is actually aware of the Fed's new policy of paying interest on reserves (see p.2). As mentioned in my commentary, the payment of interest on reserves nullifies a central monetarist tenet which holds that all increases in the monetary base are inflationary by nature. Perhaps someone at the regional Fed realized that their position on this matter was inconsistent and needed to be clarified. Still, it seems pretty clear that the piece by Wen was aimed at (incorrectly) inciting fear about the potential for inflation caused by the expansion in the US monetary base since 2008.

Also, just to clarify my view on this issue, the reason why I wish to highlight the fact that the Fed now has the ability to both control inflation (via the setting of interest rates) and maintain a large monetary base (via the remuneration rate on reserves) is not to support QE as a policy objective. As I've made clear previously, I have serious doubts about the effectiveness of QE as a means to get the US economy back on track. Rather, my goal is to show that, in the event that the US government decides to pursue additional stimulus via fiscal policy (which I believe is needed), the Fed would have all the tools at its disposal to stabilize the benchmark rate, control inflationary pressures and accommodate for the excess bank reserves created as a result of the additional deficit spending by the US Treasury.

S&P cuts the US ratings outlook to negative

So the rating agency is cutting the US's fiscal outlook to negative? It appears that the reason behind S&P's decision is that the US failed to follow the likes of Canada, the UK and France, among others, in concocting a "credible" plan to achieve a balanced budget within a completely arbitrary and meaningless time period.

If you're interested in learning why the US cannot face insolvency (or "go bankrupt", as Davos and D.C. types like to claim), I recommend you read "True Sovereigns will not default" by Steve Major of HSBC Global Research (January 2010, p. 3). Essentially, the article explains why the notion of default risk is a non-starter for countries such as the US, Japan and the UK where governments have full sovereignty over their own currency. In the case of these "true sovereigns", the risk to investors stems from interest rates and inflation.

Also, I strongly recommend the comments made here by Ed Rombach on Reuters Insider, who describes S&P's decision as a "non-event". According to Mr. Rombach, the US cannot default on its debt given that it issues its own currency. Also, Mr. Rombach discusses the remote possibility that the US could choose to default for political reasons rather than for financial ones as a result of Congress not raising its debt ceiling. Bottom line for Mr. Rombach: sell 5-year credit default swaps on US government debt.*

Email ThisBlogThis!Share to TwitterShare to FacebookShare to Pinterest
Labels: Financial

In this presentation, post-Keynesian economist Mario Seccareccia of the University of Ottawa applies the sectoral flows approach to macroeconomics to discuss the importance of fiscal policy. Some of the issues covered in the presentation were discussed in two of my earlier posts (here and here). The presentation was given last week in Bretton Woods, NH, at a conference organized by the Institute for New Economic Thinking. It's well worth the 15 minutes.

The paper submitted by Prof. Seccareccia can be found on the conference website here.

As mentioned in my earlier posts, the sectoral flows view of the economy facilitates macroeconomic analysis by showing how the receipts and outlays of each sector of the economy create a corresponding rise or fall in the sectors' net acquisition of financial assets. In the presentation, Prof. Seccareccia uses the example of the Canadian economy to show how the government surpluses of the late 1990s and early 2000s corresponded with a decrease in savings by the household sector.

Thoughts on the expansion of the US monetary base

In the cover article of the latest edition of Monetary Trends, economist Yi Wen of the St. Louis Fed is cautioning US policymakers on the risks associated with having a large monetary base (i.e. bank reserves plus currency). In the article, Wen argues that the increase in the monetary base resulting from the Fed’s liquidity facilities (e.g. quantitative easing) since 2008 has the potential to lead to a rise in inflation and, in the longer term, an increase in unemployment.

While there is nothing out of the ordinary in Wen’s argument (it's essentially textbook monetarism...typical for the St. Louis Fed), it is surprising that the article does not mention the fact that the Fed now has the ability, as a result of recent changes in the Fed’s basic operational framework, to both maintain a large monetary base and defend the economy against inflation.

Recall that in October 2008 the Fed started paying interest on bank reserves at a prescribed remuneration rate. In several respects, this new mechanism represented a fundamental shift in the way monetary policy is implemented in the US because it enables the Fed to control both short-term interest rates and the size of the monetary base. The decision was at the time considered as so significant that economists of the NY Fed felt compelled to explain the implications of the new approach toward implementing monetary policy in a staff report in July 2009:

In contrast, under the Fed's previous operational framework, it was generally understood that the central bank influenced interest rates and the level of economic activity by making changes to the quantity of reserves. This meant that to control inflation the central bank would have to raise rates by reducing the amount of excess reserves and the size of the monetary base as a whole. Under the Fed’s traditional framework, large quantities of excess reserves were usually regarded as an indication of future inflation.

Getting back to Wen’s article, it is clear that the author is still thinking of monetary policy in terms of the operational realities of the Fed’s previous framework. By solely focusing on the size of the monetary base and its potential negative impact on future inflation and by citing economic research relying on data that predates the Fed’s decision to pay interest on bank reserves, Wen appears to be suggesting that the potential risks to the economy should simply be mitigated by resorting to a reduction in the amount of base money. In my view, this would explain why the article avoids the more useful (and interesting) discussion about how best to use the Fed’s new operational framework to stabilize future inflation (via its influence over market interest rates) while also maintaining a large monetary base (via its authority to set the remuneration rate on reserves) in the event that it becomes necessary for the Fed to support its liquidity facilities for a period longer than anticipated.

To conclude, if the purpose of the article was truly to assist policymakers, as the final paragraph seems to suggest, the author should not have simply cited research on the possible impact of permanent increases in base money and concluded that "caution must be exercised such that long-term inflation does not increase". Rather, it would have been more helpful for the author to mention the ways in which the negative effects of a large monetary base can now be more effectively addressed than in the past as a result of the improved operational framework in place at the Fed since October 2008.

For more on the payment of interest on bank reserves, I recommend the following articles. If you're interested in reading about the implications of the new policy from a post-Keynesian perspective, see the excellent articles by Scott Fullwiler and Marc Lavoie:

Keister, T and J. McAndrews (2009): “Why are banks holding so many excess reserves?” Federal Reserve Bank of New York Staff Reports, No. 380.