It's baaack: Paul's Japan paper (monetary policy and expectations in an era of low inflation) (trying not to be wonkish)

One of the ongoing debates in economic policy these days is the question of whether a central bank on its own can be effective at getting an economy out of the doldrums.

The most famous exposition of the idea that a central bank, by itself, has the ability to boost economic activity is Paul Krugman's paper entitled "It's baaack: Japan's Slump and the Return of the Liquidity Trap" (1998).

In the paper, Prof. Krugman explains that, in a (hypothetical) world of Ricardian equivalence in which fiscal policy has no effect on the real economy, the central bank can get households and firms to borrow and spend by announcing it will bring about higher inflation in the future. 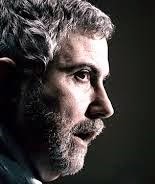 Prof. Krugman knows that the assumption of Ricardian equivalence is far fetched and unrealistic; he only includes this simplifying and unrealistic assumption in his paper to make the point that the central bank can on its own stimulate the economy when fiscal policy is unavailable as a policy option (due to policymakers ideological aversion to public spending, the presence of high public debt, etc.).

Now before I go any further I want to say that I'm a huge fan of Paul Krugman. I think he's one of the most sensible economic commentators out there and I agree with almost all his views on policy. On the effectiveness of central banks alone to boost economic activity during a deep recession or depression, however, I'm quite skeptical.

The logic in Prof. Krugman's paper can be summarized as follows:

In other words, Prof. Krugman is saying that an increase in expected inflation of, say, three percent will have the same expansionary effect as a three percent cut in interest rates.

All this makes for a plausible story. However, things aren't as simple in the real world.

The problem is that Prof. Krugman's 1998 paper makes inflation a function of expected future inflation, as in the New Keynesian Philips curve (which, in passing, since it assumes no trade-off between inflation and output gap stabilization, is "neither Keynesian or a Philips curve", as Robert Solow once quipped).

In the real world -- and the evidence and the current state of economic activity seem to support this -- inflation is a function of backward-looking expectations: inflation displays significant inertia. Peoples' beliefs about expected inflation are based on past and present inflation. The notion that past inflation is irrelevant, as embodied in the New Keynesian Philips curve, seems to me implausible.

Prof. Krugman is aware of this criticism. Economists Robert Gordon, Alan Blinder and Martin Neil Baily all raised this point during the discussion that took place following the presentation of his paper. Here are the minutes that were recorded from that discussion:


Robert Gordon...criticized the assumption in Krugman's models that the monetary authorities can easily change inflationary expectations for the future -- that the announcement of a policy will change expectations despite present slack in the economy. He believed that agents' expectations depend largely on actual experience, and that they will experience increased inflation only when there is pressure in the markets for goods, services, and labor. Alan Blinder agreed. He thought that Krugman's inflationary policy would work if it could be implemented; but that would require the Bank of Japan to create expected inflation, which, in turn, would require persuading people that the future was going to be fundamentally different from the past. Japan had zero inflation in the past six years, and the average in the previous decade was 1.8 percent per year. Thus to create expected inflation of 4 percent, with actual inflation lagging behind, would be difficult.[Martin] Baily concurred, observing that it would be easy for Russia to be credible in announcing inflationary policy but hard for Japan. (Krugman, 1998:201)

True believers in the power of central banks will respond to this line of criticism by reverting to this old saw: a credible central bank would not have let inflation get too low in the first place, thus people's expectations would never had been unhinged as a consequence. To this, I say: wishful thinking!

When it comes to the role of expectations in explaining macroeconomic outcomes, Robert Solow warned that it should be used with caution (though Solow said this in a different context):


...[T]o rest the whole argument on expectations -- that all-purpose unobservable -- just stops rational discussion in its tracks. I agree that the expectations, beliefs, theories, and prejudices of market participants are all important determinants of what happens. The trouble is that there is no outcome or behavior pattern that cannot be explained by one or another drama starring expectations. Since none of us can measure expectations (whose?) we have a lot of freedom to write the scenario we happen to like today. Should I respond...by writing a different play, starring somewhat different expectations? No thanks, I'd rather look at the data. (Solow and Taylor, 1998:93)

The problem with economics and economic policymaking these days is that too much of it relies on monetary policy and the role of the central bank. There are limits to what central banks can do because people do not believe central banks are omnipotent and have the ability to control inflation expectations on demand. For this reason, Old Keynesians had it right: fiscal policy must be resorted to bring about normal economic activity.

To summarize: Inflation displays inertia and peoples' expectations about the future cannot be dictated by the central bank alone. Basically, inflation is the result of the interplay of supply of demand for goods and services. When you have more demand than supply, prices and inflation accelerate; when you have more supply than demand, prices and inflation decelerate. It's that simple. That's the secret to understanding what creates inflation, barring the effect of any bottleneck issues.

The central bank can have an impact on future inflation, but mainly as a result of its influence in affecting aggregate demand and real economic activity in the present and future, not as a result of its ability to affect expected inflation and overall expectations in general.

The ongoing low inflation affecting economies at present despite considerable monetary stimulus and the use of unconventional monetary policies such as forward guidance in countries such as the U.S., the U.K, and Japan is evidence that expected inflation relies on past and actual inflation and that central banks' ability to stimulate economies at present via the so-called expectations channel or by attempting to increase expected inflation is currently severely limited.*

Krugman, Paul. It's Baaack: "Japan's Slump and the Return of the Liquidity Trap", Brookings Papers on Economic Activity, 2:1998

* This post is dedicated to my heroes in macroeconomics: Robert Solow, Alan Blinder, Robert Gordon, Martin Neil Baily and Paul Krugman, to whom I owe so much for their insights
Posted by circuit at 08:19 4 comments: